I would like to tell you a story about my friend. One day, his man parts suddenly became very sore. He suffered for a while hoping that the pain would go away on its own. It hadn’t. Quite the reverse, it got worse and it slowly made his life more and more miserable. He had to start taking an odd day off now and then because of the pain, and he was worrying about the impact that it’d have on his job. And on his mortgage repayments. He felt he couldn’t talk to his manager about it, because he didn’t think she’d understand. As his pain got worse, he found he couldn’t make love to his girlfriend. He started to stay at home more and more, while all his friends continued to go out and have fun without him. Eventually, it got so bad, he plucked up the courage to go the doctor. The doctor listened to him, and said, “It’s part and parcel of life to be in pain sometimes. Go home, take paracetamol, and it will go away, I’m sure. Besides you don’t look ill to me.” My friend was a little disheartened. But he thought to himself that perhaps he overreacted. He felt silly for exaggerating his problem. Surely the pain wasn’t that bad?

It’s just that it was and it was getting worse. Fortunately, his job meant he could work from home on the days when the pain intensified. But it all got to him. Fortunately, his girlfriend was very supportive. When they got married, and wanted to start a family, she convinced him to go to the doctor again, and he was so desperate to make her happy he agreed. It had now been four years since the pain started. The doctor, who was new to the surgery, referred him to a urologist and he was finally diagnosed with a relatively unknown but common condition. They operated and his quality of life improved. But he knows that the pain may come back.

That’s a sad story, don’t you think? Such a lovely guy. Didn’t deserve any of that. If only that first doctor treated him more seriously, he’d have been spared years of suffering.

But at this moment, I also have a confession to make. This story is not true. I’ve made it up.

I can tell you though that some parts of it are true. And that there’s one particular condition where a scenario like this is not a one-off regretful medical incident, but a typical situation. The condition is called Endometriosis. Endometriosis is a painful, debilitating, frequently life changing, condition affecting women. The endometrial tissue grows into the abdominal cavity and bleeds in line with the period bleed. But of course inside the tummy it has nowhere to escape. When it happens on the ovaries, over time it can create blood balls size of apples. Adhesions stick internal organs together. And all of this frequently causes an enormous amount of pain. And all of this causes an enormous amount of trauma.

That’s why undertakings such as Baby Box, https://goo.gl/ro9DwZ, are so important. They help by spreading awareness of this relatively unknown disease. They help women realise that they shouldn’t accept pain as normal. It helps the families of the sufferers understand what their loved ones are going through. By taking part, you become part of something very amazing. A real change for women. No woman should be told that it’s ok for her to suffer pain, just because her reproductive system works differently to that of a man. No woman should feel it’s ok for her to be in pain because she’s a woman. Awareness is everything. And if you’re a sufferer, remember, you’re not alone.

AN AMAZING OFFER FOR ONE OF YOU! TWO FREE TICKETS TO BABY BOX IN MAY 2018. JUST EMAIL YOUR PREFERRED DATE OF THE SHOW TO SURVIVINGENDO@YAHOO.CO.UK FOR YOUR CHANCE TO WIN. IT’S AS SIMPLE AS THAT. YOUR EMAIL WILL NOT BE SHARED WITH ANY THIRD PARTIES. 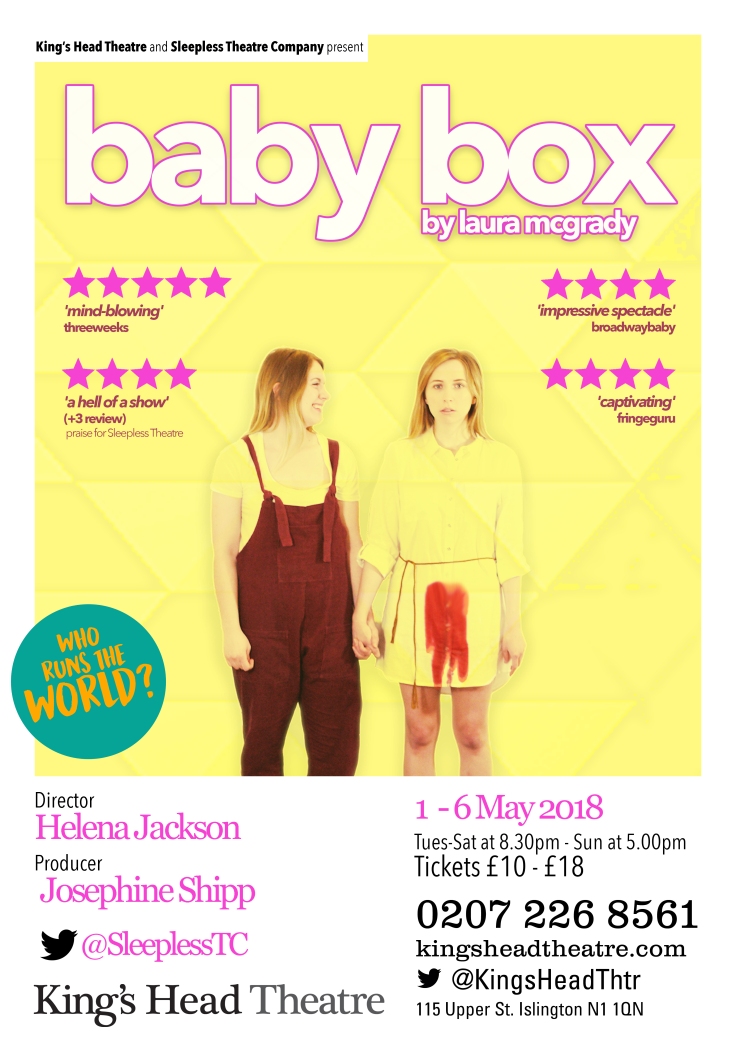